It's a house out of a dream! 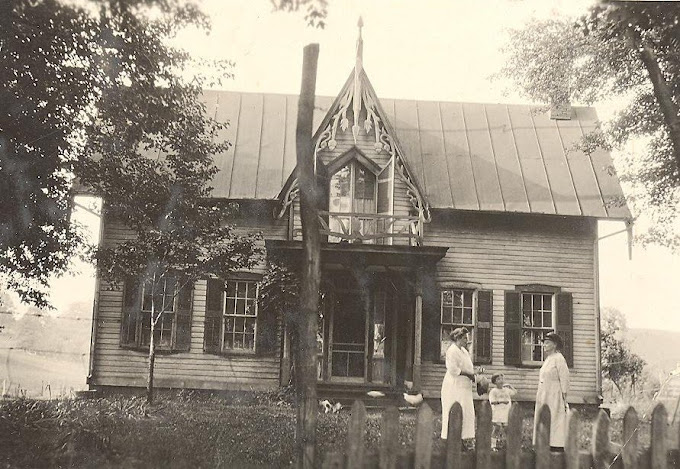 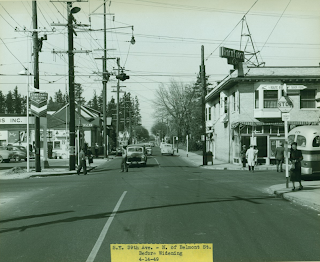 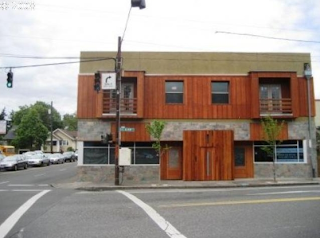 I certainly can't really make that claim since I haven't seen every remuddle of a historic building but since I live so close I see this design-stain many times a week. This building started out cool enough. For your enjoyment (or horror) is a photo courtesy of the City Archives taken in 1949 before 39th Ave was widened. You can only see about half of the building (Black Frost Co building) in this street scene. How wonderful is that! Adorable 2 story structure with storefronts and upstairs apartments. My how it has changed. First, the polygonal bump-outs were removed. To be fair, 2 of them were altered sometime in the 60's but 2 just needed painting. Then someone glued floor tile slate to the side of the building and finished it off with stained sheet plywood and interior sconces. The owners are trying to double their money in 5 years selling this travesty for 1.8 million! For the money I just don't think anyone can ever afford to un-remuddle it. It will probably just be torn down along with a growing number of historic structures in CCB (39th Ave).
Posted by Chris Wilson at 4:34 PM No comments:

The saying "location, location, location" is repeated out of the mouths of every Realtor and home buyer across the nation. It is the one constant that you can not change. Sadly it is also not a friend to historic architecture. 2480 Crestmont Place West was originally a quaint English Cottage. It was built in the first housing boom that transformed Magnolia from farms to a neighborhood in the 1920's and 30's. The first photo is a wonderful Puget Sound Regional Archive snapshot of 2480 taken in 1962. It was however built in the wrong place and with too much land around it. Even the street name lets you know it's at the top of the hill and it has views of all it's neighbors, downtown Seattle, the Cascades, the Olympics, and the Puget Sound. 360 degrees of beauty in one of the nations top cities. That meant the house had to go especially given those 2 tiny dormers facing downtown!
The next 2 photos are details of the destruction of the cottage in November of 1969 and I must admit it was my grandparents that took the house down and I'm guessing my grandfather was the photographer. They were using the large lot to built 2 homes and the cottage was right in the middle. One to live in and the other to sell. I don't even have a great photo of my grandparents house from the front. I just have an overexposed photo from the backyard of the neighbor's house that I was photographing when that tiny cottage was razed and replaced in the mid 90's. While it stood I never even really thought much of it. I always liked the more glamorous home they built next door. Check out these great newly completed images of the unpainted "Northwest Style" 2478 Crestmont Place West. It still stands today pretty much unaltered though it has been painted gray for many years.
The last wave of building in Magnolia was the biggest of all. With the neighborhood full of houses, cottages started to go. Many were doubled and even tripled in size and others were completely razed and replaced by modern "masterpieces". My grandparents house was no exception. It was razed by 2005 with the lone South chimney the only survivor. They even tore out the pool to put in a smaller more "modern" one. This house had twice the space and 5 times the sale price at 5.5 million. That was of course the asking price in 2007 at the height of the housing bubble. It recently sold for the first time in 2012 for 2.1 million. All those houses in so few years. I know that what makes a home is not the house itself. It's the people who live in it. I just see so much waste in this case and there are so many more in Seattle and all over the nation.
The final photo is one of many interior portraits I took of the house before my grandmother was moved to assisted living. This photo has a painting that is very special to me. Back in the late 60's they salvaged all of the old French doors with glass knobs from the original cottage for an artist friend of theirs. He was building a new home in Yakima and painted them this portrait of a young girl in trade. You can see an article about this house here. I have it now and although the house and my grandparents are long gone this little painting and those doors retain the heart of 2480. I guess that's all one could ask for (oh and I took the plaques off the front door when the house was being demolished! HA!). 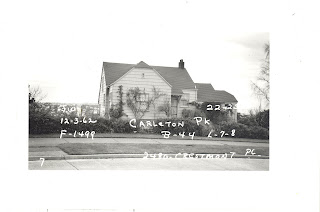 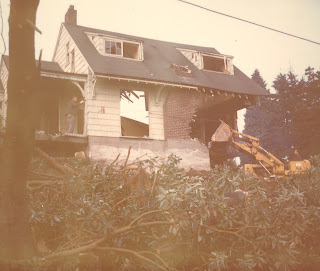 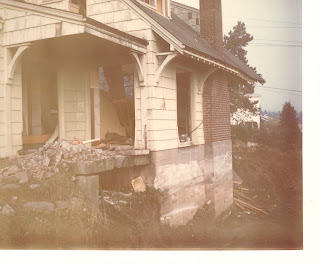 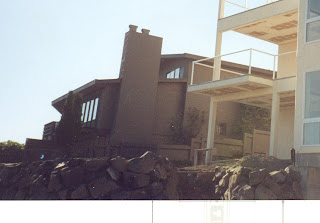 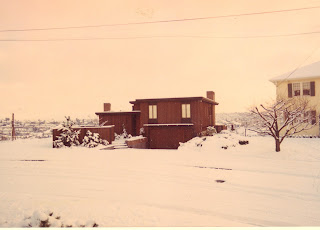 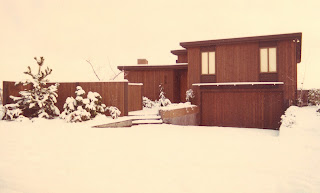 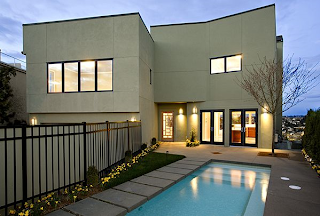 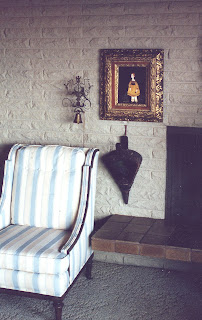 Posted by Chris Wilson at 9:50 PM No comments:

One of my favorite all time Victorian houses. Possibly Salem, OR 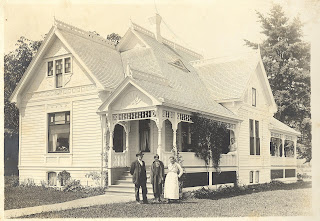 This has so much to like. First, I'm a huge fan of all white Victorian houses because it highlights the different sculptural elements without color. You see the shapes. AND THERE ARE SO MANY SHAPES. From the stick and ball fret to the eyebrow dormer this house is AMAZING! I doubt it still survives but you never know. Purchased in Salem, OR though the exact location is unknown
Posted by Chris Wilson at 4:39 PM 1 comment:

1920's views of a Portland Oregon street scape with children 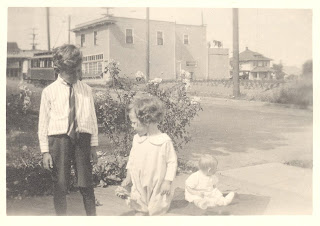 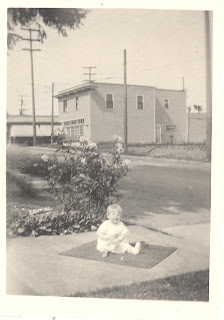 The address listed on the back of these photos is 308 E 28th which would be the original address before the modern renumbering. I was able to identify the building in the background which is still standing at 1448 NE 278th Ave! Below is a modern day photo of the building. Some of the second floor windows have been altered and most of the first floor windows are boarded up. 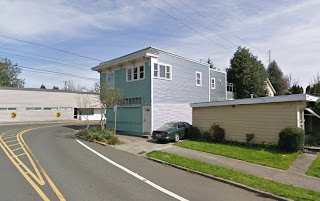 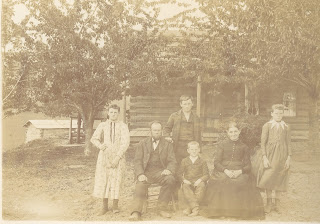 The title really says it all. I like how the logs are quite flat and there are only windows on the right side. I wish you could see the roof better. Looks like it might be some sort of flat tile/slate. Unknown location.
Posted by Chris Wilson at 12:42 PM No comments:

View of craftsman house from the backyard 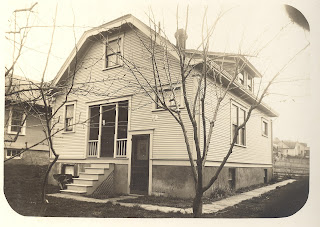 Unusual to find a cabinet photo taken from the backyard. Clothesline and all. The back porch appears to have an unusual screened in outdoor but undercover room. Lots of stairs with no railing. Some other interesting elements to point out are the unusual scallops at the top barge board as well as the original coal entrance to the left.
Posted by Chris Wilson at 12:39 PM No comments: